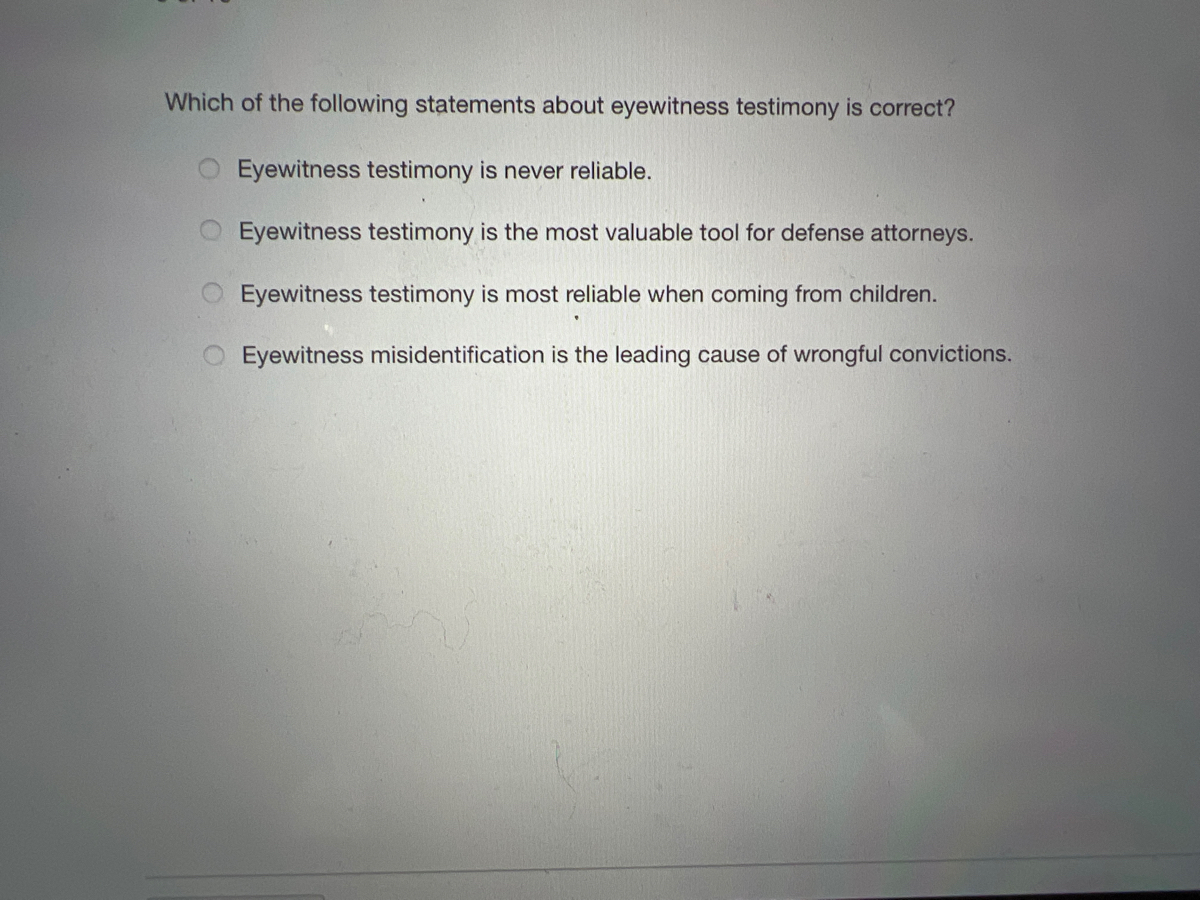 Answer; 4. Eyewitness testimony is vulnerable to the power of suggestion.

What Is Eyewitness Testimony?

Eyewitness testimony is the account of a person who claims to have witnessed a crime or other incident. A witness can offer valuable insight into the event and help bring about justice for the victim. Despite their importance, eyewitness testimonies are not always reliable, so it is important to work with legal professionals when presenting them as evidence in court.

Why is Eyewitness Testimony an Important Area of Psychological Research?

Often, when law enforcement officials investigate a crime, they develop a list of potential witnesses and interview them. In the rush to find someone who saw the incident in question, it is easy for police and other law enforcement officers to ask leading questions and influence the witness’s recollection in their favor.

Reasons Why Eyewitness Testimony is so Powerful?

The following are reasons why eyewitness testimony is so powerful. You may also be asked to write an academic essay based on the insights that you will get. If this will be challenging psychology homework help offers essay writing services to psychology students.

1. Most people are very confident in the validity of their memories. When we recall a memory, it is almost as if we are reliving it. It is easy to believe that we are recalling an event accurately.

2. Eyewitnesses often have a heightened sense of self-awareness during important events, and they get more pieces of information than they realize. They may have had a great view of the crime or criminal, noticed something in the background, heard other witnesses talking about what happened, etc.

3. Eyewitnesses may be in a psychological state called “imagination inflation,” which is the tendency for people to report remembering things that did not happen, or remember details that were not accurate.

4. The brain tends to fill in gaps in memories by creating false memories of experiences. When our brains fill up with inaccurate and false information, we can easily confuse real memories with false ones.

5. Eyewitness testimony is often based on emotions rather than facts, as opposed to scientific evidence such as DNA tests or photographic evidence of a crime.

The following are reasons that may cause eyewitnesses to make mistakes:

Stress can cause a person to misidentify a perpetrator or witness. Stress is a feeling that exists in the body and affects how we react to situations. Sometimes stress can cause people to do things they regret later, including giving false testimony.

Misinformation is the spreading of false information about an incident with the intention of causing harm or confusion. Misinformation includes rumors, inaccuracies, and lies spread by people who have an interest in obtaining fame, money, or power through their testimony.

Sometimes eyewitnesses make mistakes unintentionally, especially if they are under pressure from law enforcement or if their memories have been affected by drugs or alcohol during the incident in question.

Witnesses may be aggressive because of their own emotions, such as anger and anxiety, or because of an underlying belief that they are being targeted for some reason. The more time that has passed between the crime and the eyewitness’s testimony, and in conjunction with witness emotional arousal, the more likely witness feelings of possession will affect their memory accuracy.

Witnesses are often biased by their emotions, as well as by their experiences and personal beliefs. They may have a strong opinion about the suspect’s guilt or innocence before they offer any testimony. Bias can originate from self-interest or involvement in the event in question, or from other people involved with the investigation of the event.

What kinds of interactions between criminal investigators and eyewitnesses might create a margin for error in the identification of a suspect?

The following are reasons that may contribute to a poor identification:

Nonverbal behaviors are ways that we communicate emotion and intent with others. For example, a person’s posture or body language may help create a strong impression of guilt or innocence. Non-verbals make up a large portion of communication in any social situation, and they can affect how people interact with each other. In many cases, nonverbal behavior reflects the emotions of the people involved in the event in question.

Witnesses may be in an altered state of consciousness during an event in question due to drugs or alcohol consumption or prior psychological issues.

Describe some methods that criminologists have developed to help eyewitnesses accurately choose or eliminate suspects.

There are many methods that criminologists use to help eyewitnesses to choose and eliminate suspects. As a student, you may be asked to write an essay to describe each procedure widely. That’s why understanding some of these concepts is important.

In the line-up method, multiple photos of suspects are shown to witnesses one at a time. This is sometimes called “the show me” method because witnesses must choose which photo they think matches the perpetrator. The advantage of this technique is that it allows witnesses to make important and accurate decisions about which perpetrator is the suspect. The disadvantage of the line-up method is that certain traits (such as scars, moles, and facial hair) can be misidentified after being viewed by a witness in a lineup.

Protogrammar is the science of analyzing the elements in photographs to determine a photo’s accuracy. In protogrammar, researchers look for factors such as eye colors, hair colors, facial shapes, clothing colors and cuts, skin tones, body sizes and proportions, lighting settings, backgrounds, and shadows. Protogrammar can be used to identify whether an image has been altered or manipulated with computer programs. The advantage of protogrammar is that it decreases the chance that witness errors will be made.

Describe The Kinds of Mistakes That Eyewitnesses Commonly Make

Contamination occurs when witnesses are influenced or affected by outside sources, such as other witnesses, police officers, attorneys, or the media. They may be pressured to decide without enough information to make an accurate choice. This can lead to the witness giving false testimony, especially eyewitnesses who are not very confident in their choices and therefore feel pressured into making a hasty decision.

Under intense stress, the memory of an event is often distorted and may be incomplete, unclear, or even incorrect. The stress can make witnesses mistake certain details about a crime like where the crime took place or which criminals were involved. Instead of accurately remembering details about a situation, witnesses may automatically fill in gaps with imagined events to make sense of what they are experiencing. This is sometimes referred to as “eyewitness amnesia”.

Explain Some of The Errors That are Common in Human Memory.

Suggestibility is the influence that one person has over another to alter their memory of an event. Many different factors can increase suggestibility, including prison sentences, leading questions, and repeated questioning by police officers or prosecutors. This can also happen when witnesses are highly confident in their identifications or when witnesses have a strong emotional stake in the outcome of a case.

This is the phenomenon where witnesses forget small details about an event because they were not focused on those details while the crime was happening. This can often be seen when there are many distractions present at a crime scene, such as a crowd of people and flashing lights from police cruisers.

This is the phenomenon where witnesses attribute false memories to events that did not happen. This can often happen when witnesses are influenced by outside sources, such as other witnesses, police officers, and the media. 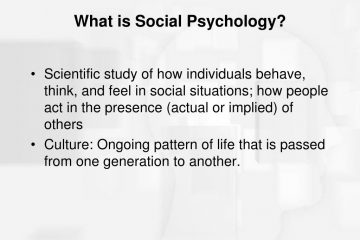 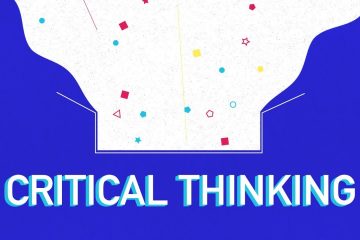 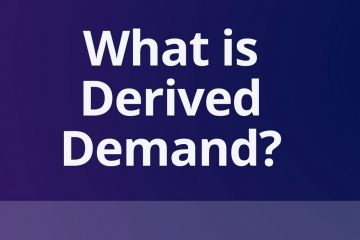 Which of the following is an example of derived demand?

Which of the following is an example of derived demand? Answer; 3. As demand for hot dogs increases during the summer, the demand for the meat that goes into hot dogs will increase. Are your Read more…